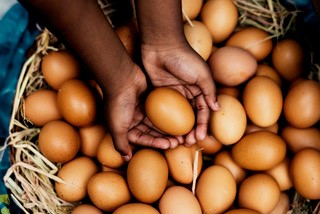 This article may not sit well with some readers.

I’m cool with that.

I didn’t name my business “rebellious wellness” because I tow the party line when it comes to women’s health.

Misconceptions, myths, and misleading information abound and I have made it my job to shine a light on the underbelly of the western medical model.

Plus, whether I know you or not, I care about you. If any bit of information I share means you get more out of life, stay healthy, or avoid unnecessary meds or procedures (which cost time, money, and peace), then my job is done.

Warning to those who are firmly in the camp of “cholesterol is trying to kill me” — this article contains graphic examples of how that cannot be true.

Our current medical model is living in the past, say 1984-ish.

That’s about the time that they decided that a low-fat, high carb diet was healthy. Since then, diabetes, heart disease, insulin resistance, and other lifestyle induced maladies have only increased.

Yes, there is a link and it’s not what you think.

More on that another time.

The late 80s is also when the first statin was rolled out to lower cholesterol in humans.

Variations on lovastatin have followed, as have millions of prescriptions and profits in the billions for manufacturers.

And millions of people, about 40% of them women, on medication they don’t need.

I’m getting ahead of myself.

Part one of this 2-part series is a primer on cholesterol, statins and women.

Part 2 will feature the more meaningful markers of heart disease and diabetes, how to get tested, and what to do with your results.

This discussion starts with a shout-out for cholesterol and the science behind it.

Call me crazy, but keep reading.

Dr. Ron Rosedale, author of The Rosedale Diet, has this to say: “First and foremost, cholesterol is a vital component of every cell membrane on Earth. In other words, there is no life on Earth that can live without cholesterol. That will automatically tell you that, in and of itself, it cannot be evil. In fact, it is one of our best friends.”

You do not have cholesterol in your blood, though you will need a blood test to tell you how much of what kind you have. The liver produces most of it. Which begs the question, would our bodies knowingly produce a zombie-like substance that would turn on us as we age?

Proof of cholesterol’s importance to our health

Mother’s milk is rich with cholesterol, and over 50 percent of its calories come from fat, much of it saturated.

Why is it ok when we are helpless little infants with a variety of systems yet formed and functioning, but not when we reach adulthood?

Here are a few of the ways the body uses — and needs — cholesterol:

Okay, enough with the bullets and I don’t want this last point to get lost.

Lowering cholesterol levels do not guarantee a healthy heart.

50-75 percent of people who have heart attacks have normal cholesterol!

Why are statins prescribed in the first place?

If you answered “to lower cholesterol,” you’d be half right.

Half #2 is to prevent the risk of heart attack, heart disease, and stroke.

After reading a dozen or more abstracts published by PubMed and NIH, this represents the majority opinion on sex differences and statins, “The benefit of statin therapy has been well established in men, for both primary and secondary prevention. However, the same has not been shown for women. While studies have demonstrated benefit in women for secondary prevention, their role in primary prevention of cardiovascular disease remains controversial.”

Secondary prevention refers to those patients who have had a heart attack to prevent a second one or are at high risk for a first one or a stroke.

Dr. Lissa Rankin adds this, “The benefits of statin therapy are clear for women with established cardiovascular disease at high risk of heart attack or stroke. But for women looking to prevent disease, the evidence does not show statins are as effective.”

A link to diabetes?

Statins can increase the risk of developing diabetes by about 30 percent in people already at risk for the disease, or who have prediabetes, according to a 2017 study in a British medical journal.

“People with normal blood sugar do not develop diabetes because you put them on a statin. These people were going to become diabetic anyway. Maybe we accelerated their diabetes slightly,” says Lloyd-Jones writing for AARP.

Are you okay with maybe having your diabetes accelerated?

Caveat. In women over 70 this risk for developing diabetes can rise to 70%.

Speaking of women over 70, Dr. Kresser again with important data, “Although outlier data exist the bulk of the evidence suggests that statins don’t extend life in the elderly, regardless of whether they have heart disease or not. And, in fact, the highest death rates in the elderly, especially those over age 80, are associated with the lowest cholesterol levels.”

Since diabetes is a major cause of heart disease it begs the question, why are so many otherwise healthy women being prescribed these drugs?

Kidding. The answer is outdated science which docs are basing their treatment protocols on.

And their diet prescriptions.

We all know that cholesterol in food is responsible for our blood cholesterol levels, right?

The man most people call the father of the cholesterol theory of heart disease, Ancel Keys, knew as far back as 1954 that “(T)he cholesterol content, per se, of all natural diets, has no significant effect on either the serum cholesterol level of the development of atherosclerosis in man.” (Thanks to Jonny Bowden for that tidbit from his book, The Great Cholesterol Myth, Why Lowering Your Cholesterol Won’t Prevent Heart Disease and the Statin Free Plan That Will.)

Less than 4% of the population have a gene that causes super high cholesterol, called hypercholesterolemia. They are not the norm and must follow stringent protocols to stay healthy. The rest of us can look to our lifestyle habits to prevent heart disease and diabetes.

The liver makes about 80% of the cholesterol the body needs.

So far I’ve given you reasons to reconsider lowering your cholesterol unless you are at risk of an adverse cardiac event.

And you’ve read the many ways cholesterol is important to our health.

In part 2, you’ll learn about the health markers that are more telling than cholesterol alone, how to get a comprehensive lipid panel, and the importance of some foods you might think are taboo.

Say tuned for part 2 next week.

Meanwhile, if you don’t already, have an egg, the whole egg.  Here’s a blast-from-the-past mind and body tune-up tip on eggs. It’s a 3-minute audio on why it’s one of nature’s perfect foods.